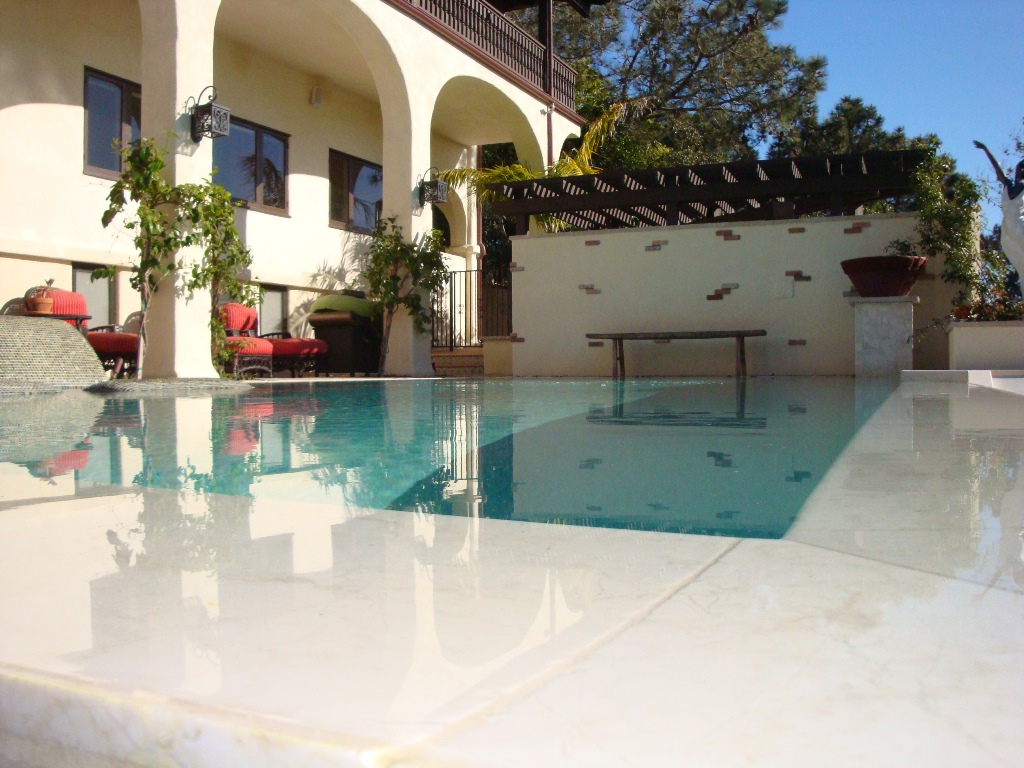 It started off with a request for basic lighting control. The owner of this Del Mar home simply wanted to control the newly installed LED and security lights on the property from the master bedroom suite above the pool. The backyard, meanwhile, was undergoing a complete overhaul, morphing from an area with a simple pool and barbeque pit to one with an infinity pool, sauna, Jacuzzi and outdoor kitchen/dining room.
The custom electronics (CE) pros from Audio Impact, San Diego, Calif., fulfilled the lighting request with a Control4 system that organized the sconces, pool lights, and security spotlights into easily accessible zones. Since they were there already, Audio Impact president Ryan Lipkovicius asked the client, why not add a little music and some video, too? Eighteen months and 250 feet of conduit later, the backyard had been wired for six zones of audio and a big-screen Jacuzzi theater.

The owner got his bedroom-controlled lighting system and then some. He can turn on lights in various zones of the backyard to keep an eye on the kids, check on the firepit, and turn off the pool or security lights without having to leave the bedroom. Audio Impact added a three-way switch outside that mirrored the lighting commends in the bedroom so that the lights could be managed from either place.

Control was a key concern for the owner, who didn’t want to have to go to different areas to change the volume on speakers or flip lights on or off. Audio Impact had the benefit of being able to start from scratch with the backyard do-over. The crew ran wire in conduit to speaker locations and control pads and installed specially designed pool speakers according to spec. Underwater music requires heavy-duty amplification, according to Lipkovicius. The pool speakers are fed 100 watts each because “you need a decent amount of power to move sound through the water,” he explains.

There’s a central Control4 touchscreen controller in the master bedroom above the pool deck where the owner can set the lights and volume levels for each zone, including the Paradigm on-wall speakers on the balcony above the pool deck. Individual controls in each zone allow users to tailor the sound at those locations. The outdoor kitchen received a bit of special attention. In addition to an independent volume control for the music, there’s an OnQ intercom station. From it, the parents can call any of the three kids to dinner from various locations in the house. They can also use the intercom to buzz in guests who are waiting at the front door.

The spa area got its own private theater, a Samsung 46-inch TV built inside a thick shatter-resistant pane of glass. The sealed window in front of the TV protects it from moisture and doors cover the TV for extra protection when it’s not in use. All of the video sources from the home’s main video distribution system are available to the spa theater. This includes DirecTV, cable, Apple TV, a Blu-ray player and feeds from the surveillance cameras around the property. While the five other zones in the backyard enjoy a single source—usually a Rhapsody online music channel—spa users can toggle between music and TV audio while watching a movie or game.
As for the indoor entertainment system? The owners save that for a rainy day.

Underwater Tunes
Installing pool speakers in is a lot like putting a light into a pool, says Ryan Lipkovicius, president of San Diego–based Audio Impact, the company added the electronic elegance to this award-winning backyard. The round Aquasonic speakers and their special housings, which were used in this award-winning space, had to be positioned at a certain depth based on the volume of the pool. “You need enough pressure for it to work,” Lipkovicius says, and in this infinity pool that depth was about six feet. At the proper depth, the speaker vibrates the water, resulting in music “that sounds pretty good,” Lipkovicius says. “I was amazed.” EH