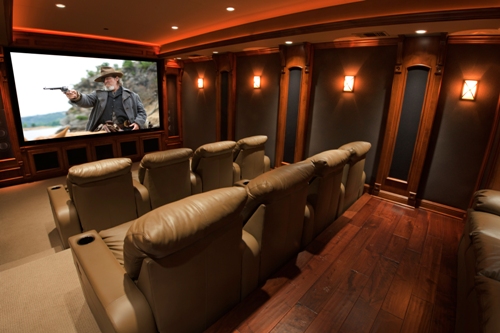 It’s obvious when entering this grand, custom-crafted theater, which part of its design took priority: the audio. A contact sensor on the door that leads into the 27-by-16-foot space triggers an array of small LED fixtures, showcasing a pair of high-grade Monitor Audio Platinum tower speakers. Most people would have chosen to let the huge reference speakers stay hidden behind the acoustical fabric that covers each of two speaker cavities built into custom cabinetry at the front of the room. But not this homeowner. “On a scale from 1 to 10, his passion for audio is a 20,” says Ryan Lipkovicius of Audio Impact, the San Diego–based custom electronics design and installation fi rm hired to build this theater.

Several small, energy-efficient LED lights were carefully positioned within each of the cabinet’s two speaker cavities. When the door to the room opens, they illuminate so the speakers can be seen through the acoustical fabric. Part of Monitor Audio’s Platinum line, the speakers are the company’s top performers and this theater’s crowning jewel.

It would take plenty of horsepower to drive these freestanding giants, plus the rest of the Monitor Audio 9.2-channel surround-sound system. Audio Impact chose an Integra DHC-80.2 preamp for its ability to work well with other A/V components and numerous audio decoding options, and a Crestron Procise Proamp-7X400 amplifier for its pure, raw output of power.

Another important part of the audio design was the engineering of a carefully constructed and acoustically treated shell. “Sam Cavitt of Paradise Theater in San Diego calculated all of the parameters, including the room dimensions, number of seats and size and position of the screen, and the software (from Kinetics Noise Control) figured where we needed to put acoustical materials, how to position the speakers, and where to put the seats so the audio reproduction was true and smooth,” says Lipkovicius. To further enhance the acoustical performance, Audio Impact and Paradise Theater instructed the contractors to “float” the room so none of its walls or ceiling would touch the walls of adjacent rooms or the floor of the room above it. Air conditioning vents, light fixtures and electrical outlets were treated with special isolation materials so that no sound would escape from the theater.

This theater is also super smart, and the opening of the door proves it. Automatically, a Crestron thermostat (the theater has its own dedicated air conditioning unit) adjusts the temperature to a more comfortable setting, select lights brighten, and the Runco LS-10d projector warms up.

The owner handles the rest of the movie viewing preparations from a wireless Crestron 5.7-inch touchpanel, docked conveniently in the wall. From the panel he can select which source to watch on the theater’s 135-inch, 1:78:1 microperforated Stewart Filmscreen display. His choices include a Sony 400-disc Blu-ray Disc player, high-def cable box, a Crestron ADMS Intermedia Delivery System (media server), and an Apple TV. This equipment, along with a Monster Power power conditioner/surge protector, Runco video scaler for the projector, and Crestron DigitalMedia switchers and processors for the distribution of audio and video and the control of thermostats and lights in the theater and throughout the house, are tucked in Middle Atlantic racks in the back corner of the theater.

Heat generated by the equipment is vented out of the theater; several Crestron sensors monitor the temperature of the equipment closet. Should it reach a certain level, the sensors trigger an exhaust fan that pulls the air away from the components.

The media server is a particular favorite of the owner’s. The ADMS sits on the home network, which allows it to stream in movies from any computer in the house. If there’s a particular movie the owner wants to watch, he can type in the title on the theater’s wireless Crestron keyboard, and the server searches the home network and the Internet for the film and delivers it to the ADMS’ internal hard drive. The ADMS also holds the owner’s huge library of music. “Thousands of songs, from artists like Lady Gaga to Andrea Bocelli, are stored digitally on the ADMS,” Lipkovicius says. Using the Crestron touchpanel, the owner can browse his library by artist or genre, select the album or song, and let the Monitor Audio speakers do the rest, showing off once again this room’s awesome audio prowess.